A map of Castle Poenari

This metal sign is near the castle, but I somehow didn’t notice it during my visit. A lady who’d contacted me with some questions before her own trip to Poenari took this photo and shared it with me when she got back. I did my best to translate the Romanian with Google Translate and Wikipedia, but there are definitely some things that could use some clarification; please feel free to send me corrections if you’re fluent in Romanian! 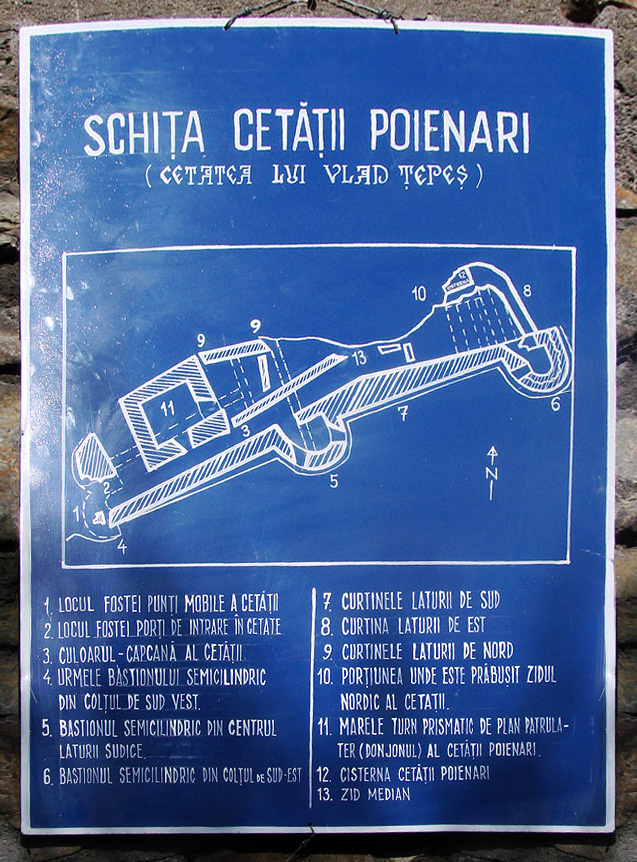 Here’s my translation, with notes at the bottom:

1. Drawbridge to the former castle1

2. Former gateway into the castle

5. Semi-cylindrical bastion in the central southern side4

6. Semi-cylindrical bastion in the southeast corner

10. Wave is a collapsed portion of the northern castle wall6

I’ve written up some notes that point out some parts of this map in my photos from my own visit to the castle.

1 In the fourth photo on this page I’m facing the castle from the far side of the bridge, which would be off to the left of the map.

2 First photo on this page.

3 In photos two and three on this page I’m outside the castle facing up to this part.

4 In the second photo on this page I’m in the southeast bastion facing the south-central one.

5 I haven’t been able to find any satisfactory translation for “curtinele” or “curtin,” but it seems like it’s probably just the castle walls.

6 I think “wave” is referring to sort of the edge of the castle terrain here, where there used to be a wall. It’s probably one of the pieces of the castle that was destroyed in an earthquake in the 19th century.

7 The tower/dungeon(/watershed) is featured in photos three, four, and five of this page. I’m not sure what they mean by “prismatic” here, and I’m not sure if this area was both a watershed and a dungeon, or possibly both?

8 In the third photo on this page, I’m standing near point 13 and facing the tower, point 11.

5 Responses to “A map of Castle Poenari”